Women carry living DNA from every man with who they’ve had sex with!

So yeah that’s right if you are a woman you retain and carry living DNA from every man with whom they have sexual intercourse, according to a new study by the University of Seattle and the Fred Hutchinson Cancer Research Center.

The study, which discovered the startling information of course by complete accident, was originally set up to determine if women who have been pregnant with a son might be more predisposed to certain neurological diseases that occur more frequently in males.

As the scientists picked apart the female brain like a horror movie, the study began to veer wildly off course. As it turns out, the female brain is even more mysterious than we previously thought (who would have known). The study found that female brains often harbour “male microchimerism“, or in other words, the presence of male DNA that originated from another individual, and are genetically distinct from the cells that make up the rest of the woman.

So 63% of women carry male DNA cells that live in their brains. Obviously, the researchers wanted to know where the male DNA came from. Anyone care to guess? From the women’s fathers? No. Your father’s DNA combines with your mother’s to create your unique DNA.

So where else could this DNA come from?

Through the study, the researchers assumed that the most likely answer was that all male DNA found living in the female brain came from a male pregnancy. That was the safe, politically correct assumption. But these researchers were living in denial. Because when they autopsied the brains of women who had never even been pregnant, let alone with a male child, they STILL found male DNA cells prevalent in the female brain.

At this point, the scientists didn’t know what the hell was going on. Confused, they did their best to hide the evidence until they could understand and explain it. They buried it in numerous sub-studies and articles, but if you sift through them all you will find the damning statement, the one line that gives the game away and explains exactly where these male DNA cells come from.

What are they so afraid of?

So according to the scientists, the possible sources of the male DNA cells living in the women’s brains are:

Considering the fact that 63% of women have male DNA cells residing in the recesses of their brain, which of the above possibilities do you think is the most likely origin of the male DNA? The first three options apply to a very small percentage of women. They couldn’t possibly account for the 63% figure. The fourth option? It’s rather more common.

This has very important ramifications for women. Every male you absorb sperm from becomes a living part of you for life. The women autopsied in this study were elderly. Some had been carrying the living male DNA inside them for well over 50 years.

Sperm is alive. It is living cells. When it is injected into you it swims and swims until it crashes headlong into a wall, and then it attaches and burrows into your flesh. If it’s in your mouth it swims and climbs into your nasal passages, inner ear, and behind your eyes. Then it digs in. It enters your bloodstream and collects in your brain and spine.

Like something out of a sci-fi movie, it becomes a part of you and you can’t get rid of it.

We are only now beginning to understand the full power and ramifications of sexual intercourse.

Want to know more check out these links

Male microchimerism in women without sons: quantitative assessment and correlation with pregnancy history

And far from demonstrating that 100 percent of a woman’s male sexual partners have male cells that de facto become part of their body, that even if sexual intercourse transferred cells from a male that later became incorporated into the female partner’s body, science has only speculated about at this point, and it clearly wouldn’t happen in all cases so read into this a little more before worrying.

Women carry living DNA from every man with who they’ve had sex with!

Sex Why The Missionary Position Rules for Dom’s… 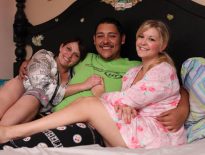