So it’s only been a couple of weeks of something new. Firstly I wasn’t expecting this, I’d come out of something not that long ago with the belief that I just wasn’t capable of relationships or not in the traditional sense anyway. I’d started to build up FWBs or friends with benefits with the view of being on my own but with pleasant and intelligent female company when we both wanted it.

The FWB is not just about sex but all the bits you get from a relationship such as cuddles, company, friendship etc but on a part time ad-hoc basis.

All of this was going great until the arrival of ‘her’. I wasn’t looking and even told her so being really honest about my expectations and lack of desire for a girlfriend . Initially thinking another FWB might be good, and as she was still interested in spite of my brutal honesty, we went out.

I hasten to add I cancelled once! Anyway somehow she instantly got under my skin, she ignited passion in me that I thought I had long lost the capability of feeling. It’s been a few weeks and honestly I’m still like a teenage boy. Gazing longingly at her, missing her when she’s not around and not being able to keep my hands off of her.

This doesn’t come without guilt though. The previous person I had seen was lovely (is lovely but were not in touch anymore hence past tense) I ended it as I just couldn’t seem to bridge that gap beyond feeling the love of really good mates but not the final ‘spark’ or whatever. It was tough as she was my friend first and foremost and I know it hurt her badly. I also ended it explaining what I thought was honestly the fact that I just couldn’t do relationships.

I guess in hindsight that the je ne se quoi that we all seek was missing. Nobody’s fault, nothing anyone can do to change it just the way it was or is.

That doesn’t mean it wasn’t good either.

So I guess for me I’m not as self aware as I thought. Armed with that information I’m going to relax into this, let it happen, try not to question too much and see what happens.

After all is better to have loved and lost than to have never loved at all? Man. Two Kids. Mid Life crisis. Read my brain dumps here. Joint owner of youonlywetter, generally all views are my own. Unlike my brother (Jonthenudist) I think Dr Who is shit.

by PogoStick time to read: 3 min
Dating Not the first 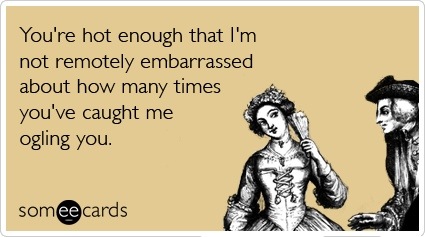