Jon Answers All Your Queefing Questions

So, you’re moving from the old faithful missionary to doggy style when your body makes a noise that sounds a queef like you stuffed a whoopee cushion up your vagina. Well don’t feel embarrassed, Bodies sometimes they make noises at inopportune times. Your vagina just doesn’t care what you’re up to, it will do whatever she wants. In this blog I wanted to explain everything you need to know about what queefing is and why it isn’t cause for alarm. What exactly is queefing?

A queef is the sound air makes when it gets forced out of the vagina, a vaginal fart yes. It’s really as simple as that, which means it’s not a sign that you need to stop what you’re doing. Lets look at how exactly does this happen?

The side, anterior, and posterior walls of the vagina all come in contact with one another. As a result of your natural lubrication, there’s a bit of a natural suctioning activity that can pull air into the vagina, That air can get forced out by coughing, laughing, straining, or sexual activity.

So queefing happens during sex because while the vaginal walls are usually somewhat clasped together, all of a sudden there’s something 🙂 in there forcing any air out. That air can also rush out if you’re waiting for your partner to enter you after changing positions.

Now science hasn’t devoted a lot of resources to investigating queefs, there is some relevant data.

Research in a 2012 issue of ISRN Obstetrics and Gynecology examined 942 Iranian women ages 18 to 80 in the hopes of learning more about “vaginal flatus,” which is a scientific name for queefing. The study notes that other names for the phenomenon include “vaginal wind, vaginal noise, or noisy vagina,“.

Overall, 20 percent of the women studied experienced queefing. It happened to 54 percent of those women during sex, which makes perfect sense. But “vaginal flatus is embarrassing to Iranian women, because it leads to their isolation from public and it is in contrast to their religious customs,” the study authors write. That’s unfortunate, because queefing is normal & there’s nothing to be embarrassed about at all. The only people who don’t experience it are people who don’t have vaginas.

It’s just a fanny fart (what a past partner called them) just a normal passing of air. There are only two situations in which doctors would say queefs are anything to worry about, and they’re both exceedingly rare.

First is Fistulas, These are passages that can occur between the vagina and various organs in the pelvis like the bladder, small bowel, or rectum. “Fistulas don’t normally cause queefing, but they could theoretically cause air that’s moving through the rectum or small bowels to be expelled out of the vagina.” Now please don’t worry and run to the doctors every time you queef, thinking you might have a fistula. You would most definitely know something was wrong because of symptoms like pain in the area, strange discharge, and urine or poop coming out of your vagina.

Up next is queefing could be harmful is if you’re pregnant and love the sound so much that you have your partner blow air in your vagina so you can queef. Blowing air into your vagina could “technically” cause an air embolism, which is when an air bubble enters a blood vessel. “With pregnancy, you get a huge increase in blood supply going to the vagina and cervix. The blood vessels also tend to be a little more porous, so it’s a bit easier for air entering the vagina to get into the vessels.” This possibility is so uncommon, and your partner would need to blow in a hell of a lot of air but be careful nonetheless. So you know queefing is normal, but still hate it. What can you do?

There are a number of things you can do to help stop queefing if it really bothers you, you can try keeping your partner’s penis or a sex toy inside of you when you’re changing positions 🙂 makes it a bit of fun this way. That gives air less of an opportunity to get into the vagina. But the big one is less in-and-out thrusting should lessen the likelihood of a queef getting loose, but hell thats no fun.

Try some lube? Now I am not just saying that because I own this toy shop and you can buy lube here here and here 🙂 but using a stickier lubricant might be able to help hold the vaginal walls closer together when you’re switching positions, going for oil or silicone-based lubes because they’re gummier than water-based lubricant. Just remember that oil-based varieties aren’t compatible with condoms, and silicone-based ones can damage silicone sex toys.

But the big part of this that I want you to learn most of all, try to remind yourself that queefing is the exact opposite of a big deal. Especially if it happens during sex with someone you ostensibly feel more comfortable with than a room full of other exercisers. It’s always best to focus more on the task at hand.

Jon Answers All Your Queefing Questions

by Jon the nudist time to read: 6 min 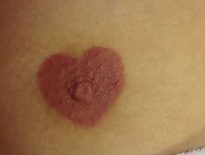 Naked Why Do I Get Nipple Erections? The Hard Truth :)

couples Are You Having Issues With Your Libido?
0
Share This