Why Do I Get Nipple Erections? The Hard Truth :)

So as my partner has nipple’s that are like bullets the second a drop in temp I wanted to find out more about these weird and wonderful things. They go hard when you’re turned on and stick out like tent poles when you’re cold and then sometimes, just go hard for no apparent reason. In this blog I wanted to tell you all that it turns out there is a reason behind the often unpredictable erections, and it’s down to a highly specialised type of nerve cell that does nothing else except generate nipple erections. Yep bloody women 🙂 have all the fun an organ just for sex now they have another part as well. According to the journal of Nature Neuroscience, hard nipples are normally involuntary and are controlled by the sympathetic nervous system, which also coordinates and regulates all our other unconscious bodily functions.

Alessando Furlan a co-author on the study said: “We’ve shown that the sympathetic system consists of many types of neuron that regulate specific functions in the body. For example, one thing we found was that goose bumps and nipple erection are caused by neurons that are specialized to regulate these functions by controlling the erectile muscles in these tissues.”

Of course, being cold, breastfeeding and sexual arousal can also prompt your nipples to stick out, which might be down to how sensitive the area is, or the smooth muscle cells around the areolae contracting when stimulated. So there you have it…

Well not that crazy after all so got me thinking we all know that breasts come in all different sizes and colours, but did you know that there are different types of nipples, too? There are eight different kinds of nipples, says a clinical instructor at the University of Southern California. All of them are normal, and it’s certainly possible to have a combination of two or more types This refers to nipples that are raised a few millimeters above the surface of the areola and point outwards. The nipple can harden and become more pronounced with cold or stimulation.

The entire nipple is flat and blends into the areola. The nipple can harden and become more pronounced with cold or stimulation.

The entire areola and nipple area looks like a small, raised mound on top of the breast. The nipple can harden and become more pronounced with cold or stimulation.

The nipple retracts inwards. Sometimes, you can use your fingers to bring it out, but sometimes, the muscles are too tight.

One nipple is raised, the other is inverted. If this has always been the case, it’s perfectly safe. But if this is a new development, it might be a sign of breast cancer, so see your doctor immediately.

It’s common to have bumps on the areola surrounding your nipples. These bumps are called Montgomery glands and can sometimes look like whiteheads. Sometimes, you might be able to squeeze dead skin cells out of them, but don’t play with them. Every woman has the glands, but some people are bumpier than others.

Stray, dark hairs growing out of the areola area are normal. They might be fine or coarse. It’s safe to pluck them out with a tweezer. Every woman has hair follicles, but some people are hairier than others.

Some people (like Harry Styles!) have extra, smaller nipples. They either look like flat moles or have a fully-formed, raised bump.

Why Do I Get Nipple Erections? The Hard Truth :)

fetish Being a Masochist: A Beginner’s Guide 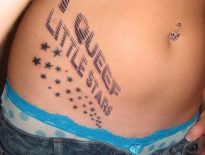 Crazy Jon Answers All Your Queefing Questions
0
Share This