Is comprised of two pieces: the first, a slender glass wand with a curved tip; the second, a small bullet with wired controller. The controller is a two-button affair, the first an on/off button and the second, higher up on the device, is for the mode. The two buttons are actually two ends of one bit of plastic so it’s really easy to find the other button without looking. The vibrator has ten functions: 1- Low buzz 2- Medium buzz 3 – High buzz 4 – Rapid pulse 5 – Rapid pulse with double-length buzz every fifth 6 – Continuous rising and falling scale 7 – Rising and falling pulse scale 8 – Long sections of longer pulses followed by rapid pulses, repeated 9 – Seven quick pulses, one long buzz then back to continuous pulses 10 – Rapid pulses followed by a long buzz, repeated The modes themselves are fairly varied, however to me modes 8 and 9 are really just space-fillers. The controller has a discreet red LED on it that lights when it buzzes, which I quite like. But, more importantly than that light, what the hell is going on with the light on the bullet itself? For some reason which completely escapes me, the bullet lights up stupidly BRIGHT WHITE when it buzzes! It’s entirely unnecessary and really off-putting. Honestly, when I first turned this vibrator on to play, the combination of the silly high-pitched drone (I’ll get to that in a second) and its ridiculous light show on the pulse settings made me physically burst into laughter.

This is quite simply lovely. I’ve never had anything in glass before but I can tell you that glass is smooth, clear and seems strong. What’s more, the spirals around it are very fetching and much better than the Barbie-ish pink on the controller. The wand itself is pretty slim and this has its pros and cons. On the one hand, I really enjoyed that its slender size meant I could slide into my pussy with absolutely no effort even if I wasn’t fully ready for penetration. This has got to be a great G-spot wand for beginners because it really seems dainty enough for even toy virgins. On the other hand, the lack of girth means that some people are going to be left wanting a little more. Though I really enjoyed the ease of use of the slimness, I did at times wish I was a little more full, especially when using the vibe on my clit.

That said, different horses for different courses. I was also pleasantly surprised by the fact that I could actually really feel the

spirals on the wand. They feel absolutely wonderful going in and you get a lovely sensation from each loop of the spiral. Whilst, as my first G-spot toy, I have no real basis for comparison, I thought it was pretty good and it certainly made me come. Being glass, the Icicles Wand also warms up very nicely and pretty quickly to body temperature. I also tried a bit of temperature play with it. I wrapped it up in an ice pack from the freezer for a view minutes before use and I can tell you that it felt wonderful. The coldness dissipated fairly quickly, but might stay longer if it was cooled more thoroughly. Essentially, the wand is very good and of a good quality. The size is great for beginners and it really hits the spot. It looks classy and the spirals feel great.

THE COMBINATION AND CONCLUSION

So, how do well does it all work together? Well, so-so. The only major problem with using them together like this is that you have to be really firm in pushing the bullet into the hole because it vibrates itself back out pretty easily, leaving you fumbling around and wasting time. On the plus side, the vibrations do carry down the shaft of the glass wand. However, I’m not convinced they do it particularly well. A vibrating glass wand is a great idea, but I think you might be better off looking at some of the more standard glass vibrators in the Icicles line if that’s what you’re after. The vibrations were not as strong as I’d have liked. All in all, this is a great concept, but it’s let down on the execution. The glass wand is beautiful and wonderful whereas the vibrating bullet is an ugly sister: strong and powerful but too crass, brash and noisy to forgive. If you can put up with the son-et-lumiÃ¨re, go for it, you’ll enjoy this toy. If not, you might be better off buying a standard or a more ordinary vibrating glass dildo and a better vibrator separately. This toy has given me a lovely glass wand which I will cherish and convinced me both that the Icicles range must have some fabulous basic glass toys and that I love glass as a material.

Sex toy and related product reviews, Usually I'm female, sometimes were a couple, occasionally he's male. Either posting our own reviews or those sent to us by our customers or trusted friends. If you fancy becoming a reviewer contact [email protected] 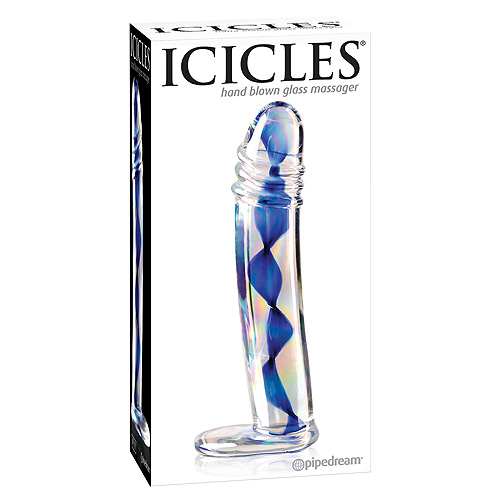