Rubbing You Up The Wrong Way – Frotteurism

So yet another sexual paraphilia we are learning about today is Frotteurism, this sees people yes agreeable its mostly men and occasionally women derive sexual pleasure and arousal from non-consensually rubbing up against other people particularly with their erect penis and/or pelvis. Given that frotteurs like to carry out their activity relatively undetected by their victims, they frequent public places where individuals are crowded close together such as in underground tube trains, lifts, and anywhere where there are crowds normally places like gigs and sporting events. Most acts of frotteurism are carried out from behind the selected victim and without eye contact. The act itself is viewed as a criminal offence a sexual assault. Frottage now tends to indicate consensual rubbing between two individuals.

Frotteurism was first recognised as a specific paraphilia in the revised third edition of revision of the American Psychiatric Association’s Manual of Mental Disorders.

The current criteria for the diagnosis of frotteurism are: Much of the academic and clinical literature on frotteurism comprises single case studies and individuals that have been studied are characterised as being pathological opportunists. In a 2008 book chapter review on frotteurism by criminologist Dr. Patrick Lussier noted that it is “difficult to draw a valid and reliable epidemiological picture” because of (i) the paucity of literature on frotteurism, (ii) the relatively recent inclusion of frotteurism as a disorder in the DSM, and (iii) the conceptual and definitional problems of frotteurism. Despite these limitations, Lussier and Piche examined prevalence surveys among four different groups (i.e., non-clinical samples of children; clinical samples of children and adolescents; non-clinical samples of adults; clinical samples of adults). There are many problems with the data collected particularly as to whether the rubbing and touching by children really constitutes frotteurism. Furthermore, there only a limited number of studies on which to base prevalence estimates coupled with the fact that the studies have used different methodologies to collect the data. The main problem is the lack of a standardized diagnostic definition of frotteurism meaning no firm conclusions can be drawn. Given these many caveats, the findings on the prevalence of frotteurism can be summarized as follows:

Between 4% and 10% of US children commit activities of frottage, while between 6% and 8% have touched others’ sexual parts. There may be cultural differences, as rates of sexual touching in Swedish children (aged 3 to 6 years) were as high as 25%.

Clinical samples of children and adolescents:

Based on some fairly large-scale surveys, approximately 30% of the general population of adult men has committed at least one act of frotteurism.

Based on a number of studies comprising various paraphilias and paraphilia-related behaviours, approximately 10% have committed acts of frotteurism.

A few studies have attempted to examine the frequency of frotteurism among those who engage in the behaviour. However, the evidence base is very small and based on self-selected samples of either those incarcerated for sexual offences and/or those seeking treatment for their behaviour. A 1993 study by Dr. J.A. Shaw and colleagues published in the Bulletin of the American Academy of Psychiatry and the Law reported that of the 25 juvenile sex offenders they examined, a total of 15 acts of frottage had been committed, for a mean number of about 0.6 acts per sex offender. A 1987 study by Dr. Gene Abel and his colleagues published in the Journal of Interpersonal Violence, found that their sample of 62 frotteurs had a mean of 849 acts of frotteurism but a median of only 29. A later 2001 study also published in the Journal of Interpersonal Violence by Dr. S.C. Zolondek and colleagues included about 80 frotteurs. They reported that the mean number of victims as 9 and the mean number of acts as 15.

Paraphilic comorbidity is common among frotteurs. For instance one study by Dr. Kurt Freund and colleagues on 144 frotteurs found that 68% also had at least one other paraphilic behaviour (with exhibitionism and voyeurism being the most common). Another 1991 study of 60 men published in the Archives of Sexual Behavior by Dr. T. Templeman and Dr. R. Stinnet reported similar results.

The review by Lussier and Piche asserts there are two types of theory that attempts to explain manifestations of frotteurism. These are the ‘social incompetence’ hypotheses and the ‘sex drive’ hypotheses. Social incompetence hypotheses speculate that frotteurism arises because of certain psychological disturbances (e.g., extreme shyness, mental retardation, psychopathology, etc.) that lead to social incompetence, and therefore limit access to consenting partners. Sex drive hypotheses speculate that frotteurism arises because of high sex drives and/or the inability to control sex drives explain frotteurism. Both of these theories could operate simultaneously but, to date, there is no empirical evidence that supports either theory. Therefore, Lussier and Piche suggests that a theoretical model attempting to explain frotteurism should address the following empirical observations:

(1) It can start very early in childhood, especially when sexual victimization is part of an individual’s childhood experiences;

(2) activities associated with frotteurism tend to co-occur with a wide range of other sexually inappropriate behaviors in childhood;

(4) there is some preliminary evidence that different paraphilias first occur at different ages, with acts of frotteurism first occurring in early adulthood, on average

(6) in adulthood, acts of frotteurism tend to co-occur with more specific paraphilic activity (namely, exhibitionism and voyeurism), as well as with other nonsexual criminal behavior

Lussier and Piche argue that researchers and clinicians need to take a broader approach to frotteurism where age and development are taken into account. They claim that the emergence of frotteurism behaviour in one developmental period or another may reflect various difficulties in successfully completing these developmental tasks:

“(1) Shifting to a more covert expression of sexual activities in childhood as the child grows older and become more aware of parental and cultural norms; (2) developing internal inhibitors to control sexual urges while experiencing a shift from parental vigilance and influence to peer influence and opportunities in early adolescence; (3) learning to develop trusting and intimate relationships with peers in middle and late adolescence; and (4) learning to communicate effectively with an intimate partner in adulthood. The continuity of the manifestations of frotteurism may be attributable to the persistence of those excess and deficits over time”.

In summarizing Lussier and Piche’s main argument, Dr. Niklas Langstrom said in a 2010 issue of the Archives of Sexual Behavior that “frotteurism is strongly reinforced behaviourally by immediate sexual gratification with very little cost and investment (albeit at the expense of another person)”.

Rubbing You Up The Wrong Way – Frotteurism

by Jon the nudist time to read: 8 min 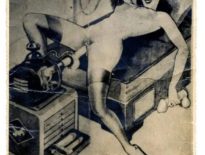